Heading up to the power lines on the south ridge of Mount Norquay. We parked at the Fireside picnic area and began on the Cory-Edith Pass trail. Turning off to the right when it turned north. Got into a clearing under the power lines and hiked to the first one. It wasn't on a ridge so we went to the next one (pictured) which was clear against the sky. There is a faint trail (most of the way) along the power lines. It ends up lower on the ridge than the actual lines at this point though.

Two years ago around this time of year I'd tried to climb this peak but parked at the wrong gate (one gate too soon). This ended up taking us up a slope/ridge on the south end of Norquay that was to the east of this south ridge. We ended up on the proper route around treeline, after some struggle. But after reaching the false summit a rainstorm to the north turned us around. No one was having much fun after the mistake, but I wanted to continue anyway. On the way back down we went a slightly different way and it was also terrible. I thought I'd never go back, except to try the shorter difficult route from the ski hill. But I decided on this day I had nothing better to do, so would give this route another try after all. To finish what I started. However I wasn't parking at any gates this time and started at the Fireside picnic area instead.
© Alison Sekera 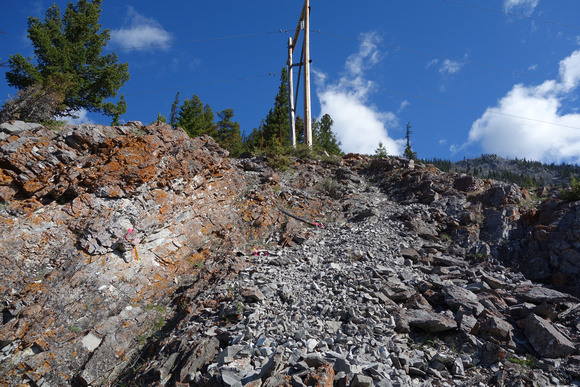