Sofa Mountain from the first meadow on the approach trail.

As I mentioned in previous reports I've been trying to do this mountain for a while. I attempted it twice last year but turned back due to cloud cover and obnoxious winds. I eventually swore I wouldn't leave the parking lot unless conditions were perfect, and finally such a day came! With almost no wind in the forecast, and almost no threat of thunderstorms it was an amazing day.

The scrambling on the northeast ridge route is great! The northeast ridge route is the first ridge right of center, in this photo. There is quite a bit of scrambling up it, with nice little plateau areas in-between to rest in. The rock I thought was great. It is quite solid (for the Rockies). Though obvious pieces where not attached. And the scrambling was blocky, with positive holds. Rather than slabby, using friction moves (which I am far worse at). It was really fun!
© Alison Sekera 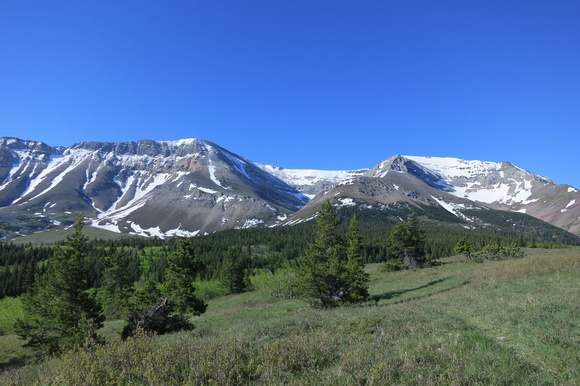