Heading into the gully to the north of the Kane west-southwest gully.

After a recent photo and short description of a trip up this mountain, several of my friends decided they wanted to try it. I joined them, despite wondering if it wasn't going to be a bit scary. Perhaps I should have told myself it would be fine before instead. Then maybe I wouldn't have actually ended up quite scared for some of the ascent.

After some discussion we didn't go up the easier Kane route (west southwest gully -Zizka's descent) or Zizka's ascent route, but rather decided to try the next gully to the north. Which might be easier or might not go, I thought. I forgot a third option: it might be harder! It actually turned out really well, but my fear of sustained steep terrain, steep snow, steep slab (any slab really), and traversing all had to be constantly suppressed to get up this thing. My fear of getting left behind by myself to ascend last, also made me a needy partner. Thanks to everyone for their patience and route finding skills!
© Alison Sekera 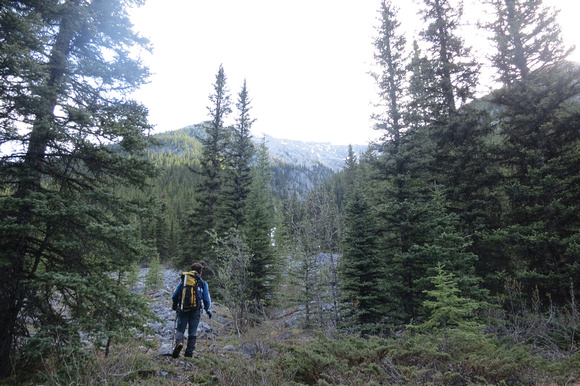