Out of the trees and into the flats before the final steep ascent to the Bow Hut. Above the hut in the sun is St. Nicholas Peak.

This trip was done with the ACC. It was a great group of people, very patient and supporting. We had two beautiful bluebird days with low avalanche conditions, which is something of a rarity on the Wapta Icefield. It was a quite cold but there was nothing else to complain about except some wind affected snow at the top of the ski slope.

As we left the parking lot it was around -25 degrees. It was so cold the glue on one of our group members skis was not sticking to his skis and he ended up having to use electrical tape on them. The end of the canyon was not properly covered, and the track went up and around a very round about way to get to the final slope and out of it. Then was the treed side-sloping section and finally we were out in the open below the hut.
© Alison Sekera 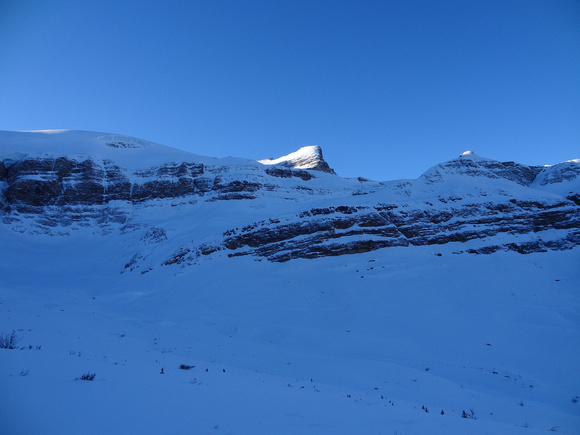