After skiing up Whisky Jack trail we turned off up the Lookout trail. While Whisky Jack was freshly (in the night) groomed, Lookout hadn't been for 4 days. So it had all the new snow from Thursday through Saturday. Which was actually a good thing. It meant that there was lots of powder (for a cross country trail) for me to enjoy, and to slow her down on descent. Though in the end I think she agreed the groomed trails were actually easier because you didn't wobble around as much.

After Matt went up this hill in December, I found out that it is a "summit" that you can cross-country ski up! Meaning it is the perfect winter trip for another "work mother" adventure. So when I decided this was the weekend to do it, all I had to do was convince Elena it wasn't too steep, and the snow was going to be good, and off we went.

The day was great. The snow was amazing. The temperature was perfect for the activity. And the views were decent (but not good enough to make me think I should have done something bigger). Great timing. And she was really happy with the trip as well.
© Alison Sekera 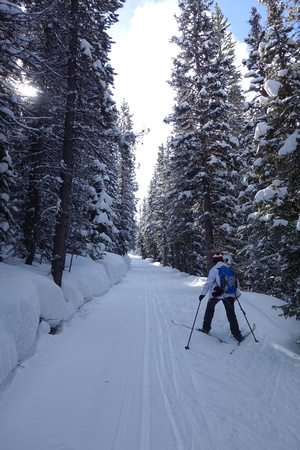