Trapper Peak (summit not visible) from the Baker lake trail.

This was our only other ascent on our Wind River Range road trip: Trapper Peak. The highest peak in the Bitterroots. It sits in the far southwestern side of Montana.

I chose not to take the "standard route" up the southeast ridge. I had found another route called the "Gem Lake Gully" which instead uses a gully near Gem Lake to ascend to the final summit ridge. It starts at the Baker Lake trailhead and goes past Baker, Middle, and Gem Lakes. Each nicer than the last. This is the main reason to do this route instead of the standard one. The lakes are gorgeous. Especially the last. The ridges and terrain around them are also fantastic. Worth visiting in and of themselves, and then with just a small amount of scrambling over granite boulders and routefinding you ascend a peak as well!
© Alison Sekera 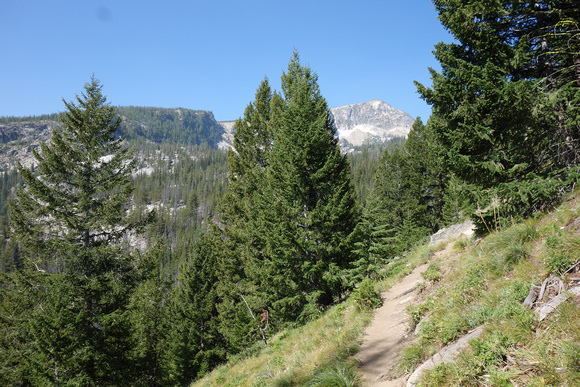