A weekend warrior such as I, only gets a couple of big trips in a season. So why, in some people’s opinions (*that book we all know of*), ‘waste’ one on the Sawback Range Circuit? For me it was to see a large swath of Banff National Park that a lot of people (who are not commercial horse packers or their clients) do not. There was also the lure of three passes in one trip. And who can resist a loop? Really, who can? Not me.

Highpoints. The three passes of course. Some lovely meadows and subalpine forests around them as well.

Lowpoints. The 2013 floods have washed away several sections of the trail. The area around Flint’s Park didn’t even feel like the Rockies to me and was boring. A lot of the other forested sections were also boring.


This is described clockwise, which is better as the approaches to the two passes you traverse are much easier that way. It does give you the passes in sort of the wrong order to appreciate them best. But that is a small price to pay. Just do the hike on the east side of Badger Pass and tell me it is not so.


To begin there is a boring ascent through forest in Moose Meadows to get onto the day hikers track to the ink pots from Johnston Canyon. A short section of this and we descended down to the ink pots which are nice enough, but there was a long way to go ahead so we did not linger here. After leaving the ink pots and the day hikers behind we soon crossed the river on a new bridge then there was a short section on flats in the open, till finally hiking through forest until Larry’s Camp.
© Alison Sekera 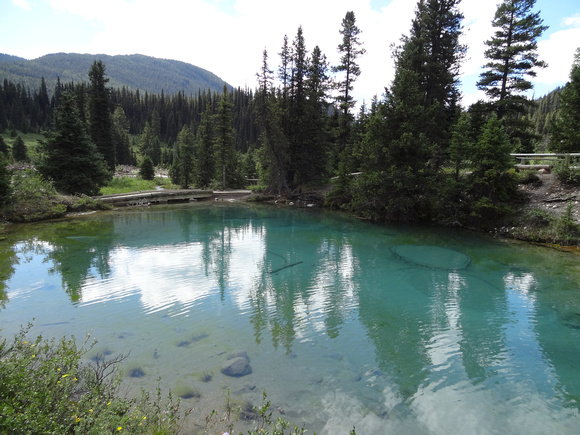