Sheol Mountain basically only really looks like a mountain from this vantage point on the way into Paradise Valley.

This "peak" is just an outlier of Haddo, which is an outlier of Aberdeen. Since its in the book, if you were chasing completing the book you would have to do it anyway though. For me, I liked the look of the blocky step like scrambling and chose to come here after a long Saturday of work.

I wasn't too disappointed by the scrambling except that there could have been more. We went up the left hand gully as it is the one that you end up in if you follow the actual watercourse of the drainage. I would have rather gone up the right one, but forgot to look at the book one last time in the morning and missed the turn off. You actually have to go over a small hump to get to it. So while it is still sort of the same drainage, it actually has its own avalanche fan that doesn't meet the decommissioned trail. Since I didn't re-read the description I was picturing something else and missed it.

We ended up going down it for variety though. It does have slightly more scrambling in the gully. It also avoids the bit of elevation loss on the ridge, and exposure of the ridge that the other one has. So its a better route despite not accessing the highest point of the ridge that is named Sheol Mountain.

Despite the summit being low and not really a summit, I really enjoyed this trip. Could have used less smoke but there isn't a whole lot to do about that this year.
© Alison Sekera 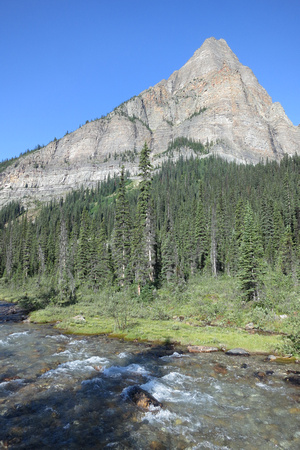