View over Hidden Lake towards the ascent slopes to Aster Lake.

As a sort of last minute thing, I joined Dave S. and his friend for a trip into the Aster Lake region. They were climbing his second to last Kane peak, Mount Northover. I had no real intention to try that one, as its too difficult for me. I decided instead to look at the "benign" remnant glacier below Warrior, and see if I couldn't get up it solo. After that, I would met them at the BC bivy. As I was slogging up to it I realized I might as well finish off the entire Northover Ridge as well since I was most of the way up it anyway. So (extremely unlike me) I started up the next morning having done zero research. Turns out its super exposed in places! Haha. It was difficult, but I made it through those sections, and after a break at the end of the ridge was ready for the long plod out past Three Isle Lake. I managed to get a ride from the interlakes parking lot to the upper, to save some time as well.
© Alison Sekera 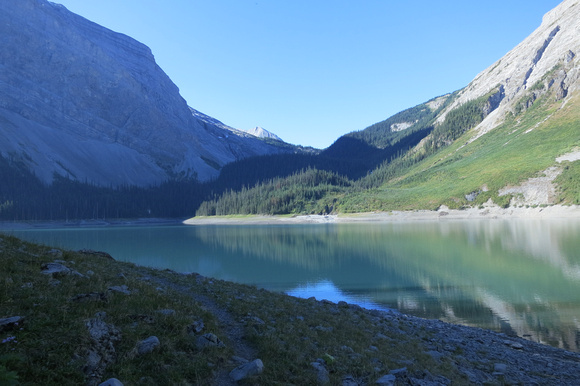