At treeline on the old road. Looking at the bypass path to avoid the first bump on the ridge.

This trip was with Dave S. At first we had other plans to ski something. But eventually decided it was too warm to ski our objective. After going through a long list of peaks we had or hadn't done we settled on this one. It was a great choice as it didn't have any of the new snow on it. The storm had hit harder farther south. Its a long hike but with great clear views in all directions, being one of the tallest fire lookouts in the area.

Note that the original start of the road is now obliterated by a logging clear cut. To find the start of the route you have to follow the left hand (eastern) side of the clear cut. We didn't know this, and ended up bushwacking up to the road on ascent. We followed the road down on descent, to find out that our hunch was correct. It did end at the north-eastern end of the cut block.
© Alison Sekera 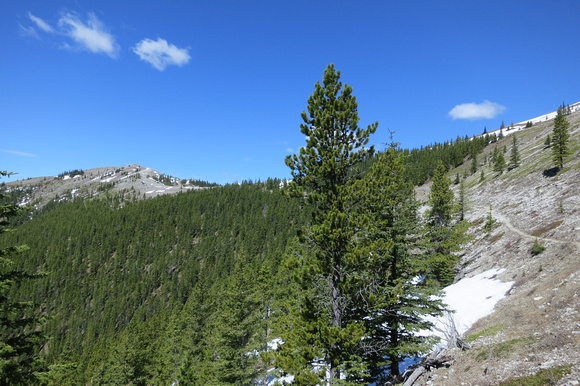