Hiking along the official trail at the start of the day.

Nearly 7 years ago I joined a meetup group in November going up this peak. I didn't do enough research into the area and route, or I wouldn't have joined. I was very inexperienced back then. You can convince yourself that certain things are safe, and I'm sure the others didn't think the conditions were much of a problem. But I've done a fair bit of winter scrambling since then, and I'd still say it was a not particularly good idea. But everyone has different confidence levels... and everyone knows mine are super low! I also incredibly stupidly took Keara (the dog) with me. I never made it to the top, stopping just off the final summit ridge to huddle with Keara while the others (seriously how??) tagged the summit. On the way back down I slipped on the ice/snow on the scree trail (no crampons, only icers on) and self arrested with my ice axe. It felt like I nearly died (though the others said I most likely would have stopped on the frozen scree below). Either way it was a truly miserable experience.

Ever since then I knew I'd have to go back in the summer to complete this mountain, but a huge mental barrier was in my way. As well, not only is this peak super popular, its also not too pleasant even in the summer. Well FINALLY I worked up the courage to take Heath, and go back to give Mount Rae a chance to finish me off. I cannot say the ascent was pleasant... Heath enjoyed the rock rib we climbed to the col, but I did not on the whole. The trail after was mostly fine, but the ascent to the ridge was extremely manky (yes that is my new favorite word). The ridge was solid but exposed. I understood how it could be fun in some part of my brain, but I was mostly just scared. When I got to the summit finally I actually teared up, I was so happy to finally get it. The way down was quicker than I thought it would take. I got to the meadows and rolled in the wonderful grass (despite the crowd of day-hikers). Why do I do this to myself again and again? As Dave would say "another place I never have to go back to". And wow, am I glad for that!
© Alison Sekera 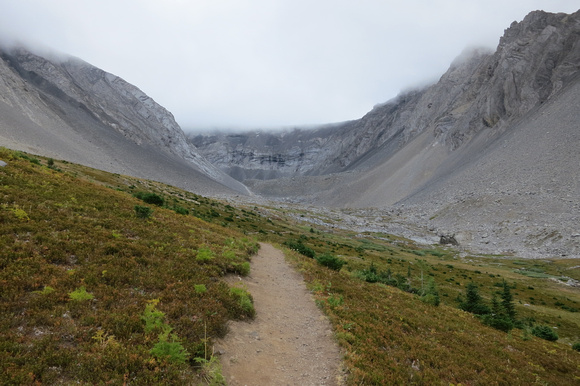