Hiking along the well road.

I had brought my bike, but after a bit less than a kilometer had abandoned it locked to a tree. This was because I'd had to push it through two smaller, and one very large patches of isothermal snow. When I'd seen two more patches ahead I'd given up, and locked it up to continue on foot. That turned out to be a very silly mistake. After those next two small patches the road descended down to this more open flat area, that was completely dry for about two kilometers. It would have been perfect for biking and I was certainly a bit disappointed in myself. However I like walking (obviously), so in the end it didn't really matter. The less than a kilometer run I did get on my bike back was fun though!

This trip was my "rest weekend" trip after the big Wapta Traverse. I needed a bit of a break physically and mentally. Though this is a longer trip distance-wise it had low elevation gain, and almost no route-finding or scrambling. Since the road; that they now close at Indian Graves, was now open again it seemed like a great time to head out. The day turned out great, with better weather than predicted. The only difficulty of the trip was the isothermal snow sections. I ended up getting quite wet feet by the end.
© Alison Sekera 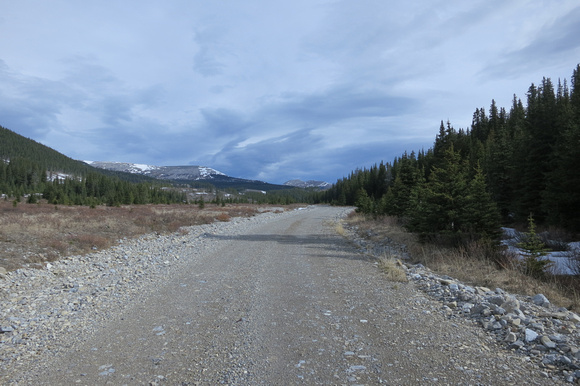