After walking along the closed road for some ways, I turned off on track "92" which follows a cut-line to a point just a bit southeast of the summit.

I had other plans for this day, but when I couldn't get partners due various reasons, I decided at the last minute to just march up this foothill. The avalanche conditions are not overly friendly to solo travel right now.

The weather forecast had been very poor. With only some, but not all models showing a brief mainly sunny period first thing in the morning. Which ended only an hour or two after the sun came up. It was actually sunnier; I hear, than it generally indicated. But it was also very cold! I started out in about -18, and was not happy about that. Its April already! The cold seemed to seep into my bones, and I was bordering on miserable as I marched along the initial road. Somewhere along this track though, I warmed up a bit and became much happier. I ended up enjoying the outing on a whole.
© Alison Sekera 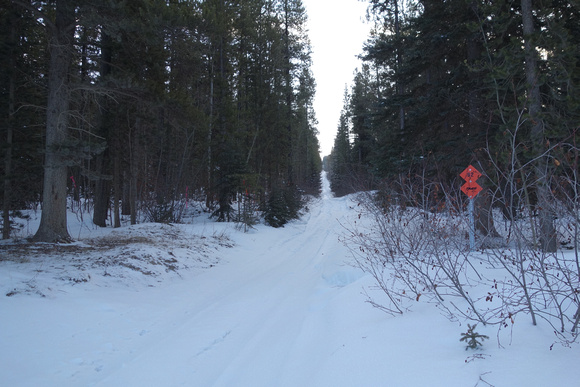