Looking at the summit of Sparwood Ridge, the location of the old (removed) Natal Fire Lookout, from a wrong turn we took early on.

Dave S. had mentioned this as a winter ascent a long time ago. Looking at the route in the Fire Lookout Hikes by Mike Potter, the western (common) route goes through some steep sections of slope on its way to the top. Snowmobiles had probably packed this route down, but due to the avalanche hazard and long drive, no one I know had gotten around to it.

On this cloudy, windy weekend, Matt and I estimated the only decent place to be which wouldn't be in a snowstorm or liable to wind gusts strong enough to blow you away, was the Fernie area. So I suggested this hike. Matt immediately didn't like the western approach. But looking at a snowmobile map from Fernie I saw there was an old FSR that led to the summit from the east instead. This route didn't involve any avalanche hazard except for the final slope to the summit. Matt still wasn't convinced so we set off with Loop ridge as our backup plan. Only with the vaguest hopes this would work.

Matt wasn't convinced we would make it unless a snowmobile had packed down the FSR and it was in good shape, due to the length of the ascent. I'd been marching around a lot foothills for similar distances if not quite elevation gains quite quickly last weekend, so I was either delusional or justifiably optimistic.

We set off nevertheless. Matt had found a good picture of the lookout on Dave McMurry's website from his Loop Ridge ascent, which showed what we were up against. It turned out to be a great trip!
© Alison Sekera 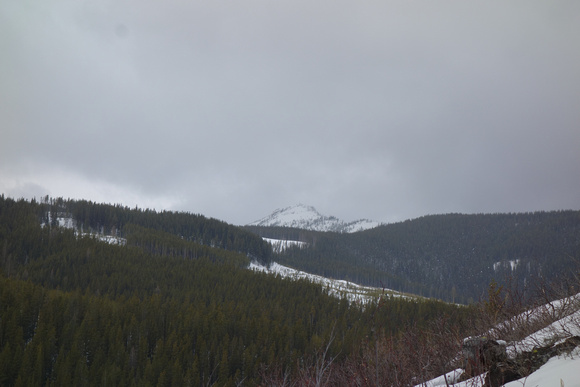