Going through the forest. We were actually on what was most likely the trail, most of the time. Not in this photo, but just after it, and the whole way down.

A short walk in the woods in the Sheep Wilderness area of Kananaskis Country. We ascended this before second breakfast of Flat Iron Steak Benny's at the Chuckwagon in Turner Valley.
In the book it just calls this hill Death's Head (Mesa Butte), but everyone calls the other one Mesa Butte (which is also Square Butte in the book). Which is all very confusing. I am calling this hill Death's Head Butte so you know its a butte. Whatever that is. This short hike finally put my 2015 totals over my last best year for elevation gain and hours hiked. So now I've bested all my stats! Well except backpacking trips (which is tied with the last two years) and nights in a tent. But there isn't a lot I can do about that now. As there is no way I'm going out and spending 4 nights in a tent somewhere. But yeah anyway for beating the rest of my yearly stats!
© Alison Sekera 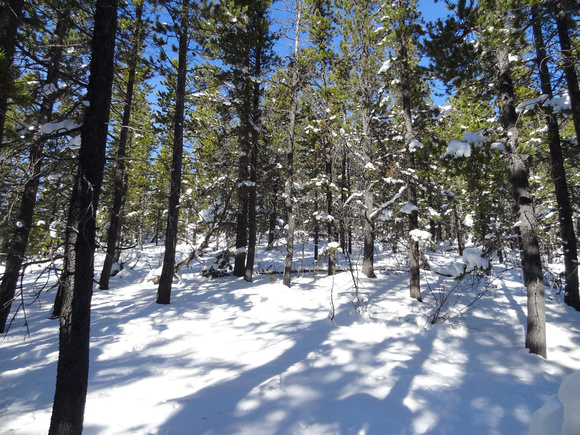