This year I decided to do Athabasca Pass. Not a popular area to go to for good reason. The trail is mostly in the trees. Except for Scott Gravel Flats you are usually in the forest, only going along next to the river for short sections. It is a true wilderness trail that lacks a lot of facilities that the more popular backcountry trails have. Bridges for one (more on that later). Also the campgrounds are just a small area without underbrush, a firebox and two tree poles. One between two trees high up, to hang your food from. One between two trees above a pit down low, to hang your @$$ from. This is the washroom. There is a general lack of people hiking this trail. That can deter people who are afraid of wildlife, or general backcountry accidents etc. I personally would not have done this alone, but with the two of us the solitude was fine.

Before I left I'd been emailing about volunteering for Parks, because I'd heard Banff needed people to take photos of signage. I wasn't going anywhere they needed in Banff though. I asked if Jasper needed the same thing. Jasper told me that they didn't - but they needed something else: people to pick up bear scat. I was skeptical at first, but decided to do it. So they mailed me a kit to collect any scat I found. What you get in return, except knowing you helped Parks knowledge of bear movements etc., is a full report on the bear whose scat you picked up. It was with the volunteer coordinators help I got updated trail information from other Parks staff that the Middle Whirlpool River had moved, and therefore the bridge no longer spans the river. As well that there was a detour to a new river crossing to avoid the Kane Creek crossing. These two river crossings worried me some on the trip in, but they both turned out to be quite manageable despite the amount of rain we'd been having recently.

So off we went. The weather forecast was not very promising. It was supposed to be raining/cloudy the first two days and the last day. This was pretty much correct. The first day it drizzled on and off for most of the morning.

(Day 1 - September 8 - In to Middleforks Campground)

We started off down the Whirlpool Fire Road. Which is a boring up and down track that goes on for 8.6km. After that you get onto the actual trail.
© Alison Sekera 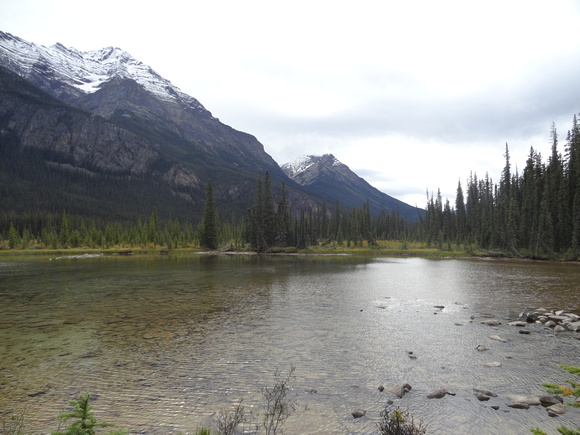