A beautiful sunrise I should never have seen from the road. I didn't notice my stupid phone had decided to change time zones on me so instead of waking up at 1.5h to sunrise, I awoke 0.5h to sunrise.

When researching peaks around Red Rocks I rapidly found the highest; Mount Charleston. Its actually the highest in all southern Nevada. As I researched the peak more, it became obvious that I could actually turn a typical two peak day (Griffith and Charleston) into a three peak day by adding on Mummy. Ascending the southern loop and descending the northern loop trails. This was extremely appealing to me obviously. It had only minimal travel off trail. The only real problem was that there was only about 10 hours of daylight and the trip would take me anywhere from 11 to 12. But you can walk down a trail in the dark after all, so I did just that. Acquiring (extremely rarely for me) blisters by the end of my long day. ~32km / 1845m / 11h. I was going fast. Darkness being a great motivation for speed.
© Alison Sekera 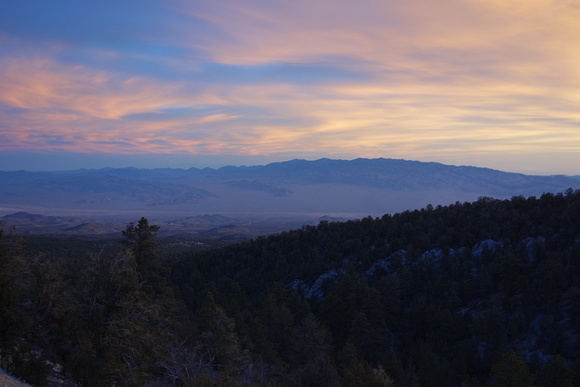