Heading up the trail

The day before we were already down in Waterton but couldn't ascend the mountain I wanted to. The wind was so strong it was knocking me over. So we gave up and hiked up to Crandell Lake and back.

The next morning we woke to overcast skies and gave up plans on a more intersting objective again. Instead I went for the easiest thing in the area I hadn't done yet.

As we had no views and I hadn't looked at Spirko's trip report I couldn't quite figure out where the summit of this "mountain" was. As it is really just one of many bumps along a ridge. We actually passed it on the way in, going over it towards the more heavily treed bump marked incorreclty on the topo map Andrew used to show the route line onto at the back of the book.

Then of course just as we were descending it cleared up a bit. I will have to do Gladstone in much nicer weather because it is a shame we didn't see the views. We could still see the red rock under our feet though!
© Alison Sekera 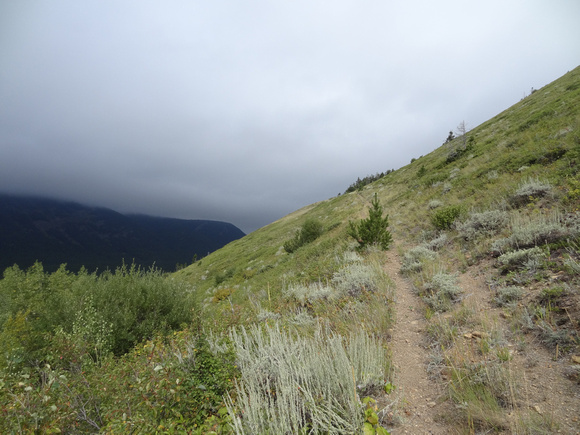