Starting up the trail.

I'd needed to re-do Ruby Ridge as last time I'd only gone to the first (more western) summit. Since then I've made it up both the hardest Kane scramble: Galwey, and the hardest Nugara scramble: Dungarvan. So I know I can now complete all the peaks/summits in the park.

Therefore I wanted to properly complete Ruby Ridge as the official summit is the lower farther eastern one. This isn't a mistake for two clear reasons: 1) it is the summit that is actually ruby in color, but more importantly 2) it is the summit that actually has more than 100m prominence. The higher, western summit only has roughly 80m prominence from Mount Blakiston. While the eastern summit is not attached to anything other than the western one, from which it has 120m prominence.

Its generally accepted that you need roughly 100m to make a real summit. This started from the Colorado "300 feet rule", which equates to 91.44m. Then you round up.
© Alison Sekera 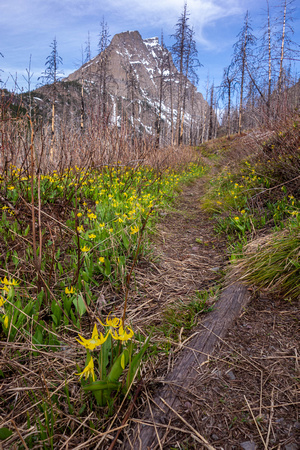