My watch was set wrong due to changing it incorrectly after my Patagonia Trip. I was also a bit sick still. So I got up 20 minutes late. After some panic, I decided to head out in my own car and try to catch up to Matt and Sandra. I was maybe another 15 minutes before I pulled out of the driveway. I did catch up, and we merged cars in Sundre.

Things continued to go badly for me. When we got to the Red Deer River to cross, I found that I'd packed Heath's sun heated camping shower instead of my hip waders. They had a very similar color and packaging. Matt thankfully agreed to cross the river 3 times each way, so he could bring me Sandra's and I didn't have to freeze and get wet.

We crossed the Red Deer River at the bottom of the rough track we had driven down. The rough track led to the old cable car crossing. A good hiking track started on the other side of the river, which led to the old road. Mount Minos behind Sandra and Matt.
© Alison Sekera 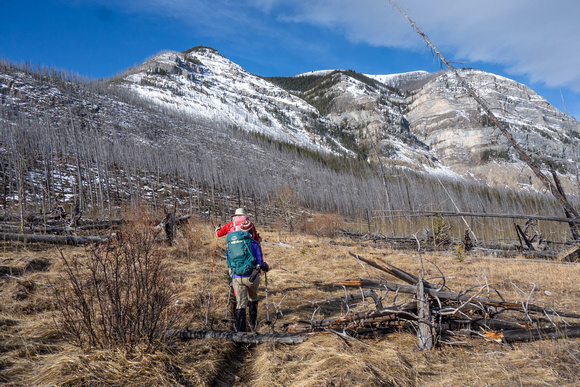