Dew on spiderwebs. I would never have though to take this picture but my coworker did and then I realized it was a really great idea.

This was the long planned hike with my coworker. Since we were going during larch season I wanted to take her somewhere with larches. Also somewhere easy, as in not a super long hike or a scramble, that she could get to. The final condition was that I would prefer the hike include an easy objective I have not completed yet so I can bag another unique 'peak' and continue to get closer to the 100 mark. Saddle Mountain would be 94 for me if you include every 'peak'. I decided on Saddle Mountain. Lots of larches and if they only got to the saddle that would work as well.

The morning started out much like the day before on Mount Whymper, very cloudy. It actually looked even worse when we got to the lake louise parking lot, but the day promised in the forecast to be better so we still had hope. We were lucky, the same thing happened as they day before, we hiked above the clouds in the valley and then they proceeded to burn off. Except today the higher clouds were gone as well and the afternoon turned out to be very nice indeed. No jackets on the summit for us. The nicest part was hiking through the upper edge of the cloud in the mist with all the dew on the larch needles and the thin mist swirling around us.
© Alison Sekera 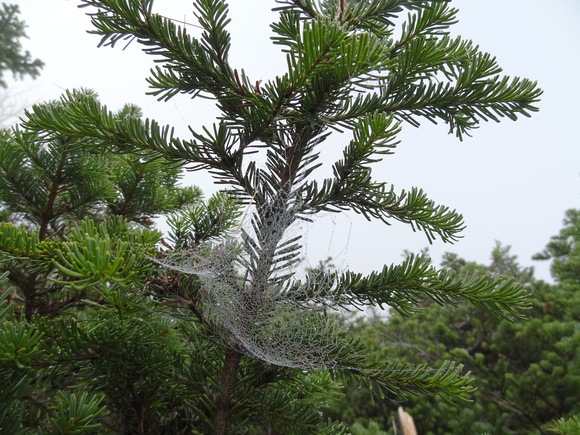