Out of the forest and into Healy Pass environs.

This was a fantastic trip, not the least because we did it during larch season. As well the views of Egypt Lakes were amazing the whole way up the mountain.

The mountain itself is just a hike up the steepish rubble slope. So the recent snow was not a problem (ok well I did fall once stepping on dinner plate slab covered in snow, but generally it was fine).

Its a long trip: 34km according to the map and 1825m based on my calulations from the hiking book. Not owning a GPS I don't have real numbers of course.

I believe Cody Nelson and I had bascially the same idea at the same time Thursday afternoon reading Vern's trip report. That we had to go out and do this trip now because of the larches! So when he messaged me about it I was already on board!

I had already heard of the mountain. Not only because of Matt's report. Egypt Lakes was one of my first backpacking destinations in 2009, and some people in the hut climbed this peak while I was there. I of course desisted, having no real off trail experience at the time. I actually planned on climbing this back in 2013 from Ball Pass Junction Campground during a larch season backpack. But constant rain and a soaking wet dog caused us to hike out early. I mostly forgot about it afterwards, so thanks to Vern for reminding me!
© Alison Sekera 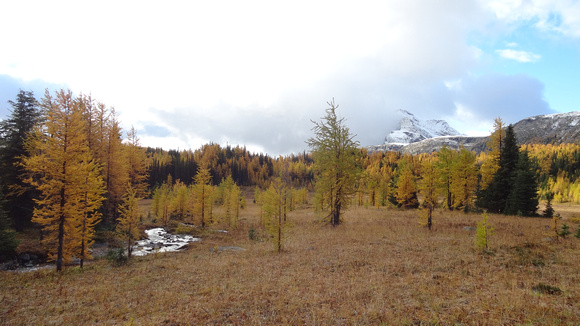