Floe Lake trail goes through an old burn. In the summer it is filled with fireweed. Now that it is fall it is a bit different.

This was the second annual larch backpack. Last year we did a backpacking trip around the same time to Twin Lakes / Gibbon Pass / Shadow Lake to see the larches. It rained about half of the trip, which felt like the whole time, but we did see a lot of beautiful larches. Well, I decided that this should be an annual thing. So this year I picked another backcountry larch destination to backpack into. Floe Lake on the Rockwall trail was my pick. I'd done the whole trail back in 2010 in three days, but that was a long time ago and I was willing to go again. I'd seen pictures from other people of Floe Lake area at this time of year and it was beautiful. Also I could add on an ascent of Numa Mountain. This one isn't in any scrambles book currently (Kane or Nugara) but I'd seen trip reports and knew that there was an ascent route up from Numa Pass, and that the views looked really good. Unlike a lot of backpacking plus mountain plans of mine, this one turned out really well. I think the trick is that the trip should be short. Longer backpacks should be left alone to simply be backpacks, and not have mountains added onto them.

The weather turned out awesome. There was hardly a cloud in the sky the whole weekend. It was a perfect bluebird weekend to end the summer with. We didn't even need to wear any extra clothes on top of our t-shirts on the summit of Numa Mountain it was so nice. You couldn't even say that of a few of our summer hikes.

The campground for Floe Lake is really nice. We got to camp within the larches there and it has a really great kitchen area on the lake. You couldn't ask for much better. There are a lot of tent sites here though, it could be a pretty crowded camp. When we were there it wasn't too bad.

We got a late start on this trip, on Saturday because of construction on highway one. For some reason completely beyond me they were re-paving perfectly good looking road between the Sunshine turn off and the Bourgeau Lake trail head. It was super annoying. We also got up pretty late due to a house warming bbq the evening before. We started our hike at noon. Oh well, we are super fast hikers. It only took us 3.5 hours to make it up the 10.7km and 697 meters elevation gain. Four years ago when I did this trail it took me 5 hours. I was carrying a bit more, but I was also just not in as good shape. I remember when doing this trail in three days (rather than my planned five due to various reasons), it being one of the hardest hikes I'd ever done. This time we got to the lake with plenty of time to enjoy the sun on the lake shore before it set behind the Rockwall, even though we started so late.
© Alison Sekera 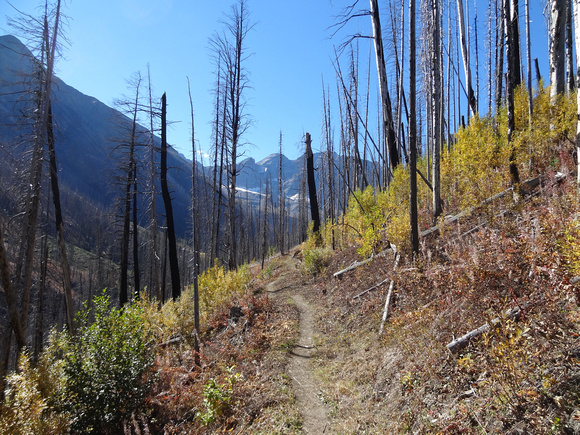