Mist in the morning did not give very far views. That can be both good (you can't see how very far you have to go) and bad (can't see where you are going and might make improper route decisions). Since it only lasted our approach it was good.

On the Friday before, a coworker emailed me. We had been in contact a lot because we had always planned on getting out together at some point. It turned out his original objective was out due to the increased chance of rain in the south, and he wanted to do Mount Whymper. Well I can't turn down an offer like that, so I quickly looked at, and printed out some information / trip reports on the mountain and agreed as long as our group could tolerate my general fear of heights. I need not have worried as we had a great group and my fear was unusually absent.


We set out under overcast skies for the mountains. On the road we found patches of sky through the cloud but it was uncertain whether the unsettled forecast of some clouds would hamper or stop our attempt. We parked at the Stanley Glacier parking lot and proceeded to walk up the road. There was an early cairn that pointed to a high trail above the road, then another one a few meters on that indicated the actual gully to ascent. There was a bit of worn down section that tended towards being a trail in the initial part of the gully but it was not always obvious. We ascended on this through mist without really seeing where we were going. We hoped (a lot) that the mist would rise at least a bit, so that route finding would be easier. If we were socked in the whole day we would have trouble picking the right gully farther up.

Thankfully we were in luck. Within a hour or so of hiking we got above most of the cloud and were the witness of a great view across the valley with the cloud below us.
© Alison Sekera 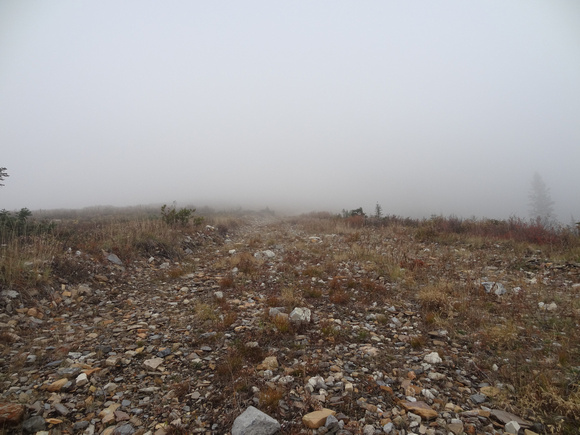