After skiing up Healy Creek Trail, I continued towards the pass. Before turning west, and breaking trail around a small tarn, then heading around to this slope. More or less via Matt's track. Once here I pondered the slope ahead, but it didn't look wind affected (no cornice or other signs of loading) and it did look just low angle enough. I measured it a few times and I think it was 25 degrees at most.

After working all weekend it was finally time to get out. I woke up pretty late for this one. I'd been considering several options, but one was sleeping in and doing one of my last Bragg Creek Hills. Then I remembered ski season proper was fast approaching, and I needed to be in shape for it! So despite the poor visibility forecasted, I set off for the last ski objective I have on my list I'm comfortable soloing (in low/low/moderate conditions like we had today). I had been saving it for a clearer day, and maybe I should have continued to do so. But too late now!
© Alison Sekera 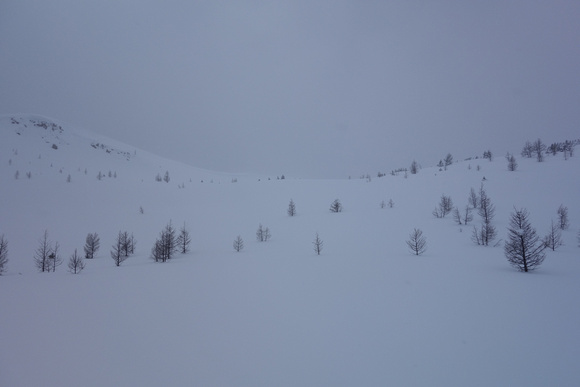