View of upper rowe lake just before you get to it. Plenty of larches here.

The route I chose is Nugara's descent route. As much as I love scrambling on solid rock these days, I was under-motivated and picked the easiest way up. Also because of the wind, I wouldn't want to scramble moderate in high wind. The descent route ascends easy slopes on the west side of the lake. The entire ascent is then turned into nothing but a hike that anyone could do. I picked a line farther south than most people, so I could stay in tree cover for as long as possible. The wind just around the lake was strong when it gusted, and I wanted to be blown around as little as possible. When I got up above the lake and saw there were more larches you could avoid or walk through, I went straight through them as well for as long as was reasonable.
© Alison Sekera 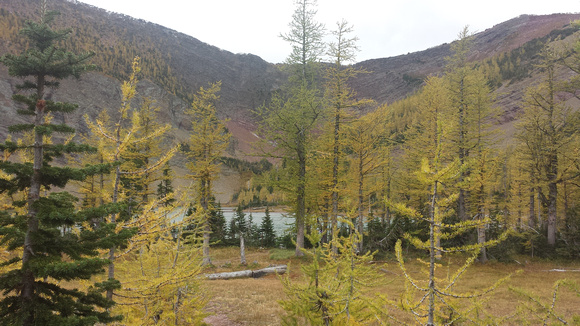