The ascent route I've drawn on in blue here approximately.

I took this Thursday off because I had to work on the weekend. This worked out well actually, as it was a beautiful day on Thursday and on Saturday it snowed. It was disappointing I couldn't take Elena on the hike I'd promised her to on Saturday, but the weather would have prevented that anyway.

I'd wanted to do Copper Mountain for a while now, I'm not even really sure why. I guess it just looked like the kind of moderate scramble which I could do. After asking around on a forum if it was dry, I even found myself some company on this trip! Which was good, because it was at the level were I could just do it solo, but I would have been more uncomfortable through some sections then I was with Carlo around.

The first part involves going up Redearth Creek trail until you get to Lost Horse Campground. This part can be biked and we did, now that two bikes can totally fit in my Mazda CX-5. I walked my bike up nearly every hill, because somehow biking on a dirt trail first thing in the morning, with a pack on your back, is so much harder than going up hills in the city. Also I am afraid to use the big gear change on my bike to get to the really low gears for going up hills. My bike is very old. It is actually a bike my grandmother bought for herself when we young, so she could bike ride with us. The large gear change never worked for some time, but Elena's daughter did some work on my bike and it should work now. I should have tested it before, because I was too scared to on the trial. What if the gear chain just fell off, or I couldn't get it back to the normal gears? I didn't want to make Carlo wait while I attempted to repair my bike. So instead I made him wait while I walked uphill (much less waiting?). The flat to mostly flat sections were very fast on the bike though.

Eventually we got to the part of the trail that is very near the ascent gully. On the trail we saw some cairns on the right side that were not indicating any well formed side trail. I don't know if people were trying to mark the best place to get off the trail before you get to Lost Horse or not. But there were at least 3 cairns so it would be hard to tell which was best. As well, all the trip reports I've read say its not worth trying to shortcut from the trail, so we ignored them and continued on biking.

At one point on the trail around this section we got a good view of Copper Mountain at the top of a small hill, and you could see the whole ascent route. It basically involves taking a rising traverse through the end of the avalanche path by Lost Horse Campgrounds cooking area. Then through a bit of forest, another meadow, some thin trees, and more meadow, until you are finally in the correct ascent gully. You follow this up on grass and then scramble beside a large wall. Once the wall is gone, then ascent slopes are less steep, and it is easiest to keep a bit left until you are on the ridge. Then it is just a walk over to the summit.
© Alison Sekera 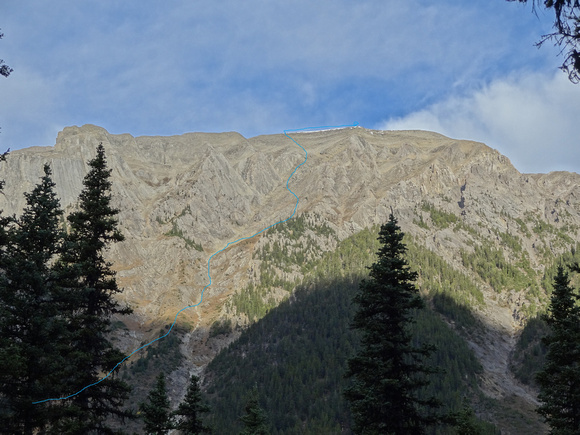