Looking back at Mount Temple at the first steep section. I've seen this few more than a few times but it doesn't get old when your there slogging up the slope. I guess the first boring 30-40 minutes help, but it is a pretty good view anyway.

First new summit of the new year! I would say off to a good start, but as I did this solo, not everyone would agree (in regards to safety).

I already ski toured up a peak solo last spring, when I ascended Heather Ridge after Heath turned around. Only one tiny slope looked steep enough to avalanche and the rating was low/low/low that day. The ascent was great and it made me wonder what else was of a similar nature, but at the time I couldn't think of anything.

I've wanted to do this trip (including Lipalian Mountain) for several weeks. I'd decided on going up Wolverine Valley instead of ascending above the larch chair based on Nugara's snowshowing book and Vern's trip report. I had originally looked for partners but failed. Then Heath decided it was unsafe for me to go alone and we rented skis for him. However as we started up the Lake Louise ski out Heath already got hot spots on his right foot, and within 15 minutes he gave up and left to return the gear in Canmore and get his money back. I continued as I'd already decided I could do this trip alone. I had seen another trip report of a solo ascent as well.

I'd spent hours looking at the avalanche report which was low/low/moderate, the recent conditions reports, and MCR digest emails (guide condition reports). I'd gone onto www.hillmap.com and used it to analyze the slopes of the entire ascent after the ski out, and it said that they were no more than 22 degrees. Avalanches usually happen on slopes 30 degrees or more, and rarely on 25 degrees to 30 degrees. Even with a margin of error, the entire ascent looked safe. Wolverine Valley, which you ski up after leaving the trail to Skoki, is wide enough that you should be be able to avoid anything dangerous near you that you don't have to ascend. I'd even looked up in google "should i ski tour alone" and came upon an article about just that. I wasn't the only one contemplating this.

There were only two avalanche problems listed in the report for Banff. Isolated wind slabs that no one had reported recent activity on, and an inversion that was breaking up that had caused a few sloughs off of steep south facing aspects. So I was only worried about the slopes off of Mount Redoubt you had to ski under at the beginning of Wolverine Valley, and any slopes I might need to go near that could be wind affected. Despite the low rating on hillmap the trip reports stated there were some steep rolls on the way to the Wolverine Ridge / Purple Mound Peak col. Also the final ascent looked steep.

I decided I would give it a try and turn around if anything concerning came up. So off I went.
© Alison Sekera 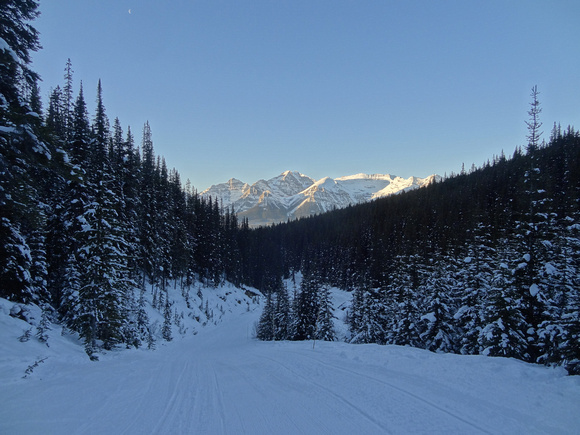