So despite meaning to I didn't actually go out and climb a proper mountain today. What is the point anyway when there would be no views? Well I know there is still a point but I couldn't think of anything easy enough that I wanted to do, so I slept in and went for a walk up a hill instead.

I started along the Powderface Trail Road from Sibbald Flats and parked at Lusk Pass trailhead. Hiked that trail, then before (not after like in the book) the campground turned off at the 2nd cairn and followed orange flagging and faint trail to the top.

The route does not involve much bushwhacking, as in almost none. I have whacked way more bushes on official trails than this.

Afterwards I decided to take a look see and drive the rest of the Powderface Trail Road to see what its like. After passing where I think (I couldn't see in the clouds) the Belmore Brown trailhead was I soon got to another gate and right after a large mud hole. I decided to go through as it looked easy, but then they just kept showing up, each one looking deeper or longer than the last until I was going down a slick mud slide hill with a conservation officers truck stuck in a ditch on one side. It was horribly scary. There was another super long mud hole after that where the track was so deep the bottom of my Mazda CX-5 was bumping along the top of the center. And a few more after that till I finally got to a bridge before the Mount Howard trailhead. After that it was easy, only one tiny mud-hole. But I was still worried until I got to another trailhead with cars in it. Real live shitty little cars! I knew I was safe from getting stuck and / or dying then. The rest of the way was easy. Wow, don't try the whole trail unless you have a 4x4 with super high clearance and want an adventure!
© Alison Sekera 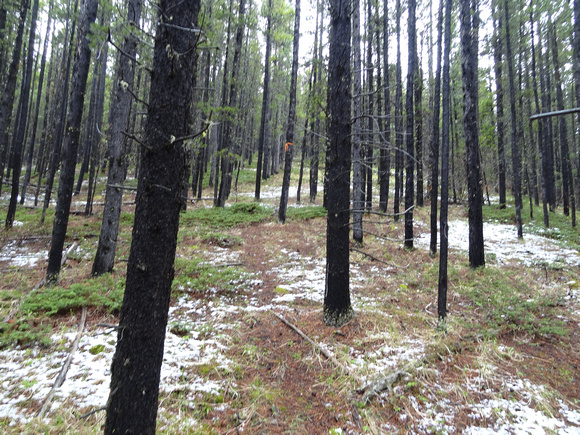