Sunrise on Red Rocks Canyon. You cannot see the peak I'm going to do in this photo. Gunsight Notch Peak isn't as high as the surrounding peaks in the area. But the two major scrambling objectives of the area; Mount Wilson (left) and Bridge Mountain (right) are visible.

I'd wanted to climb Mount Wilson. One of the two hardest peaks in Red Rocks Canyon (the other being Bridge Mountain). However I decided since I hadn't been able to complete my test piece they day before; due to my three peak day the day before that, I should just complete it instead. Which was Gunsight Notch Peak. It would involve travel in a canyon, and scrambling up a small peak. Similar to Mount Wilson, but it wouldn't be nearly as hard routefinding, or as long as a day. This made me a bit sad, but it was the right decision.
© Alison Sekera 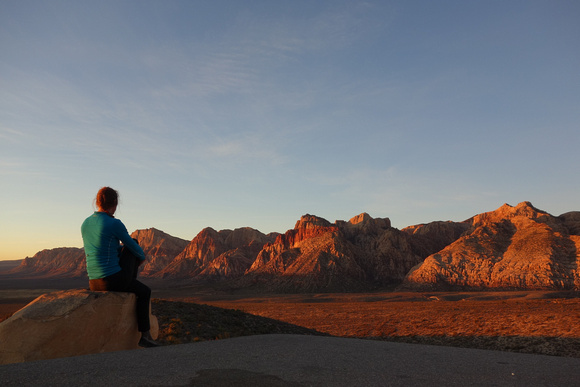