View of "Emma's Peak" (GR133558) from the road, just right of center. To the left is Mount Lawrence Grassi, and to the right is Ships Prow.

Instead of hiking up a foothill I wanted to get onto some rock, even if it was just frozen scree. On the other hand I didn't actually want to do any winter scrambling. This "highpoint" which is not a real summit (see below) fit my requirements. Cody agreed to come with me, when our plans fell through (due to the clouds) to go up Little Lougheed today.

I probably should have just done Ships Prow, but I'm glad I didn't as when the wind blew it was quite frigid. That with the new fresh slippery snow, meant it would have been more difficult than I wanted on this day out.

This peak is not impressive in any way, and is not a peak at all as it fails the 300 foot (100 meter) test by a lot! I think there is only about 20-25 meters to the col between it and Ships Prow. Its probably only got a summit cairn and a register because someone accidently went up it instead of Lawrence Grassi or Ships Prow and then didn't want to have the day be a failure? Anyway, I intentionally went up there, so what does that say about me? Haha. Just that I am really against repeats, and there aren't a lot of options in the winter. Since it does have a cairn and a register, and other people count it, I will as well. Though its debatable. But that is why there are two columns in my list afterall anyway! For debatable or unimpressive summits that are not "mountains".

You can downclimb to Ships Prow in dry conditions, but there was no way I was attempting it in these. I will just go back, hopefully no time soon, and get it from the other side.
© Alison Sekera 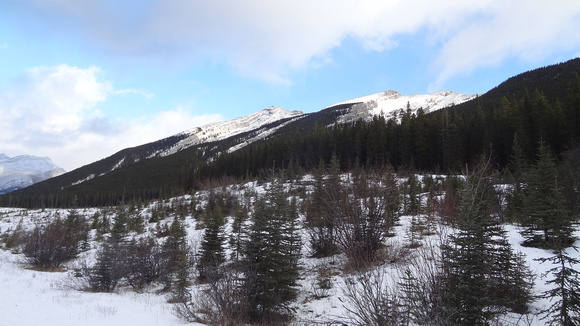