Cinquefoil Mountain from the road after we walked, quite far along it to get to the end of the ridge from the Merlin Pass trailhead.

We had made an attempt on this mountain in Jasper two years ago in the middle of July. Only to be turned back when we were not able to follow the Merlin Pass trail once it reached the small lake. We went left/east at the lake and got into deep marsh and started getting eaten alive by mosquitoes. The most I've ever seen. Epicly bad. We soon gave up and bushwacked back to the car and jumped into it, and then spent quite a while killing all those mosquitoes that got in with us before discussing what to do next. We ended up paying for the gondola up to Whistlers and doing Indian Ridge instead. Not the most satisfying trip but we managed a summit anyway.


This time we would again start off down the Merlin Pass trail and try left again. No luck. We went back to the end of the really good trail right at the lake and tried right. Still no luck. This used to be an official trail before, so it was annoying we couldn't find any sign of it. We had t0 give up finding where "the brush and forest open up", we could not get past the lake area.

We gave up and tried a different approach I read about online. Instead of taking Kane's approach we walked along the road until we were right at the end of the ridge coming down off the mountain. From there we were supposed to bushwack to the ridge. The only thing they didn't mention was the drainage ditch running along the side of the road. We found the only shallow spot to cross it then bushwacked first through swamp then brush and thistle to the ridge. The first twenty meters up were super steep and we didn't find a trail but simply got ourselves up a steep slope next to a tiny rock face. We found a trail at the top of that, and on descent we would continue to follow it down which worked out better. At the time we were just so eager to get onto the ridge we didn't bother looking for a good way up. We didn't expect a trail till we were on the ridge. Obviously a lot of people go this way now. Or a lot of goats do. At least the mosquitoes were not bad at all this year as last time.
© Alison Sekera 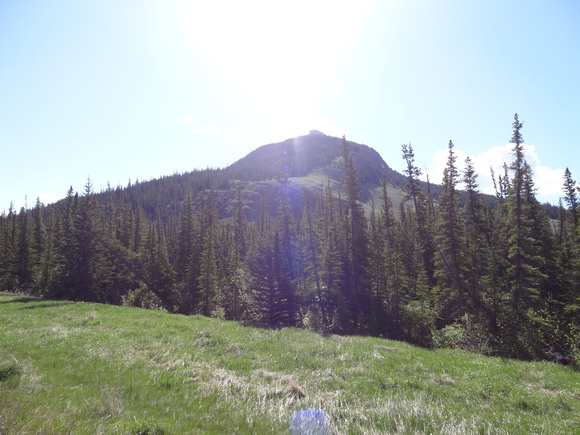