Haffner Creek after the part above the canyon, and subsequent side-hilling above the washouts beyond it.

There are few people who have done Mt. Ball and Beatrice but not Stanley. I should think fewer who would agree to go back up Haffner Creek again. Haha. I guess I'm crazy. As I can also take days off with little notice, I was on paper the perfect candidate for Dave's last Kane (2nd edition) peak.

However as anyone who has been on a lot of trips with me knows I hate side-hilling and am bad at it. That and pebble slabs are my two nemeses. This peak thankfully wouldn't have the later, but it would have a lot of the former. So I was extremely hesitant to agree. There are no photos of the side-hilling on Vern's or So's websites between the moderate SW ridge route and the gully ~70% of the way up Haffner Creek. So I had no idea what was underfoot and whether I could do it or not. It seemed a significant distance to travel if it was unpleasant. When Dave called Vern he reported that it wasn't hardpan. Or what I call hardpack, essentially extremely hard dirt you can't get a good grip on.
So in the end I couldn't let him do this important milestone peak alone, nor pass up probably my only opportunity to do it myself, so I agreed.

Huge congratulations to Dave for finishing the Kane (2nd edition) list, and his 800th peak!!!

As I was a perfect candidate to suffer a single day ascent of this semi-rarely ascended peak (as described above), I was invited by Dave to go up his very last Kane peak. After some hesitation I agreed, and I am very glad I did. Besides Haffner Creek, this is a very reasonable moderate scramble up a high peak that has fantastic views. If a proper full-on trail went up the creek, I bet this peak would be rather popular.

We ascended Vern and company's descent route and then the SW ridge (not the Kane route). While the SW ridge has a few reports, all are from the Ball bivy. There isn't a full report going up this descent I can find online, and no one in the party has a lot of photos it. So this report will be extremely heavy on (sometimes boring) route photos and descriptions.
© Alison Sekera 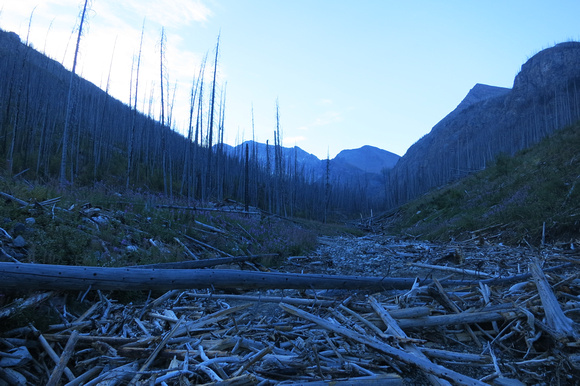