After the cold march up we get up above treeline onto the final ridge.

After some discussion (involving treed hills and ridges that had no high point) while we were driving out today, Matt suggested Rummel Ridge. He'd already been up twice, but decided the day was too bluebird to waste. So I finally got to do Rummel Ridge!

It was also great to have a broken trail on such a cold day. We took the northern route which starts to the north of the Rummel Lake trail. This route is safer than that in the original snowshoe guide, and is the generally accepted route now. Which I believe is in the second edition.

It was bone chilling cold in the morning (-37!). I couldn't get my snowshoes on at the beginning, with their horrible little metal prongs. It was so cold I was actually worried about frostbite even while moving, and stopped twice to fiddle with my toe warmers. Moving them around in my boot and eventually giving up and putting them inside my sock, which after another 10 minutes seemed to do the trick.

From the summit the views were amazing. Not a cloud in the sky, even over the divide. Making everything worth it. It warmed up a bit by then, and the descent wasn't so unpleasant as the cold march up. It was quite nice actually. Getting out is always worth it!
© Alison Sekera 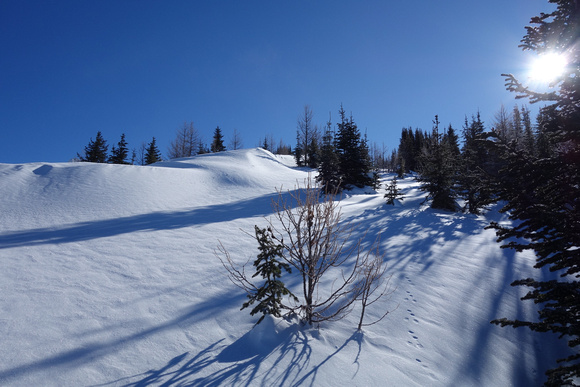