The Rendezvous all set up so that porcupines cannot eat her poor tires or break-lines, as supposedly sometimes (or is it rarely?) happens. The rest of the road is behind it there.

I'd wanted two things this from this trip: a good solo objective & another trip to BC. The Woodbury to Silver Spray Traverse fit for both of those. As it is in BC within one day's driving distance. It is also a good solo trip as you get to stay in two ACC huts (so no sleeping in the tent alone which is not as much fun, especially in the rain), and its not too popular but not completely secluded. It would be challenging as the traverse route is not on a trail, but with a good description I thought it would be a good challenge for me to do it alone. I wanted to check my route finding skills outside of just going up and down a peak.

The traverse itself was long and hard. Route finding was easy in hindsight, but while I was there it always seemed in debate whether I would get lost or not (I never did) on a macro side. Every lake/tarn I got to was a big success as then I knew exactly where I was for at least a moment. On the micro side, it actually was always in debate whether I was contouring too high or too low (usually too low, yeah! for extra elevation gain). Almost the entire thing is over boulders/talus as well. Its very tiring to walk on that stuff for a full day.

On the first day I left Calgary just before 6am and started driving down highway 1 through Revelstoke, Nakusp and Kaslo to get to the park. The driving took 9 hours including the ferry (which I caught 5 minutes before it left!), a 45 minute 'lunch' break in Nakusp (who doesn't serve lunch at 11am? I 'had' to have beer and eggs Benedict for lunch, which actually was very tasty), and a gas break. This includes the 45 minute drive up the logging road to get to the low clearance trail head. That means at 2pm I was setting up chicken wire around the Rendezvous (I'd traded cars with my father for the extra clearance) and pondering my fate. After 20 minutes of fiddling around (including putting on sunscreen etc), I was ready to set off in what was surely the hottest part, of a very hot day.
© Alison Sekera 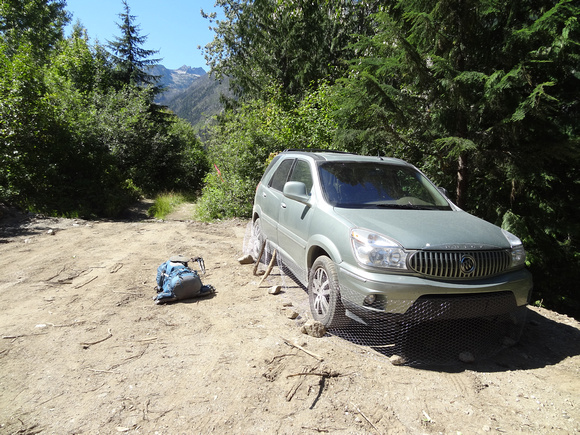