Starting up along the well defined trail.

Mount Galwey has been on the back of my mind for a while. Though this peak is difficult, it is very popular. If everyone else can get up it, then so can I? (faulty logic I know) The difficult section is actually very short so I figured if I didn't have to be brave for very long maybe I could manage. I've been doing a LOT better at scrambling in most types of terrain lately so I thought it was time to give it a try.

It was difficult. Though not for the reason that you would think if you know me. I hate traversing. I personally find it very difficult. I can go up and down things easily, that make my palms sweat at the thought of traversing. However the traverse of the small ledges on this mountain was easy. They are very clean (of loose rock) by now, and very solid. There are good handholds the whole way along, and there is only one more difficult/awkward move to get across.

The actual problem we had with this mountain, was getting into the final gully to the left of the window. I don't know if it was always like this, but right now there is a large chockstone in the center fall line of the gully. And lose material around it. It was a large step up from anywhere (4-6 feet depending where you were standing) to get into the upper gully. We chose not to go over the chockstone, but to ascend to the left of the center fall line of the gully. It involved 3-4 difficult moves and quite a pull up. Getting down it took me a few tries to work up the courage to descend this step via the way Heath was showing me. I don't know if I could have climbed this mountain without his help. The rest of the gully was quite easy though, moderate scrambling at most. And then your at the top!

Fun fact about Waterton NP: Every single mountain in the park is a scramble! There are no rock climbs, alpine ascents, etc. Which means I can do every single one if I try hard enough. Completing Galwey means I have completed 50% of the mountains now! (I'm including Lakeview Ridge in the list.)
© Alison Sekera 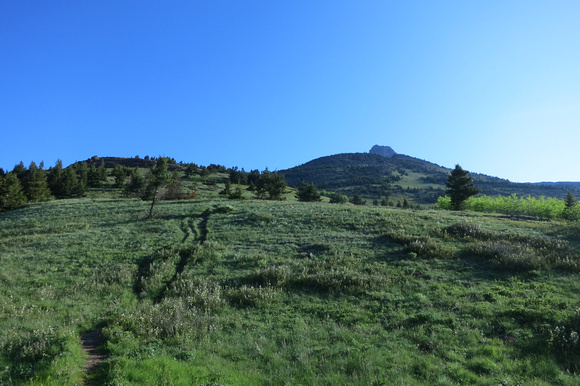