Ever since I got the snowshoeing ascent book by Nugara I wanted to do Mount Haffner. I don't know what it is about this trip, but I've always wanted to do it. I even took a reconnaissance trip up the initial slopes back in 2012. It was a day I wanted to do a hike, but didn't think I would make it to the top so I set out with no expectation of making it.

This day we were going to make it. The spring conditions had caused low avalanche risk and good snowshoeing snow up higher. Unfortunately it was so warm the evening before there wasn't a good freeze. Instead the minor precipitation that had fallen at night had fallen as rain at lower elevations. The first ~150 meters of elevation gain was on this section and it was post-holing "fun". Post-holing in snowshoes is much worse than post-holing in shoes. At first you usually think that maybe, just this time, you'll stay above the snow, and then thump down to the bottom. It is so much harder to get the snowshoe out as well. 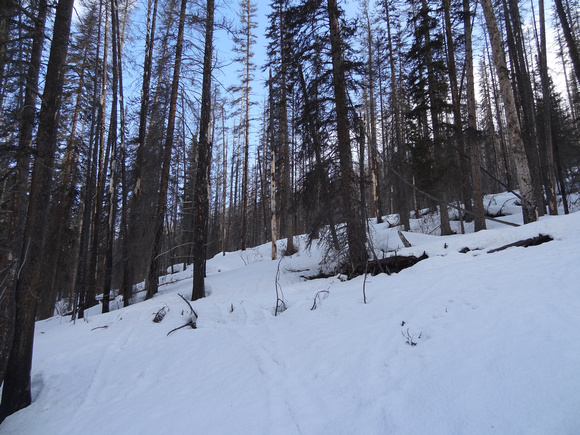